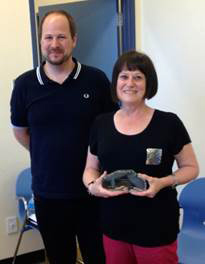 The Friends of the Winnipeg Public Library are proud to announce that Susan Fraser was awarded the 2013 Manitoba Library Service Award in the volunteer category. The service award honours an individual who has made an important contribution to the development of libraries and library services in Manitoba. Susan received her award at the Manitoba Library Association Annual General Meeting held at the Winnipeg Convention Centre on May 29th, 2013.

Susan has been involved with the Friends since 2000 and was president from 2002 until this year. She remains on the board as the manager of the popular and successful Best of Friends Gift Shop in the lobby of the Millennium Library.

Not only has Susan dedicated thousands of volunteer hours to the organization, she also has been an inspiration to others so that the Friends,
under her leadership, has realized unprecedented success in being able to financially support library programs which in turn has benefited countless Winnipeg citizens.

This entry was posted in News. Bookmark the permalink. Both comments and trackbacks are currently closed.
personalized jerseys